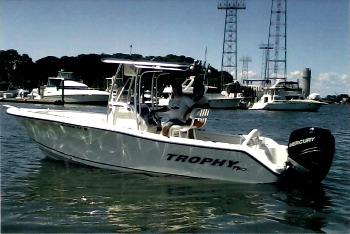 I attended last year (2012) boat show never planning on buying a boat. Especially the quality of the Trophy boat, motor, and trailer we purchased from G & S Marine, Inc. I have sailed or powered for nearly sixty years and this has to be the best summer I ever had.

From our first trip out of Brant Rock last April when a Right Whale came right up in front of us (the wrong whale to get too close) to my last fishing day Halloween jigging cod off Scituate. In between we saw the "Tall Ships" in Boston Harbor, caught stripers in Hull, visited "P" Town, and caught fluke on the backside of the Elizabeth Islands, visited cuttyhunk, and Gay Head.

I retired this year and was able to easily load the boat by myself. The Four Stroke Mercury Verado was powerful, quiet, and efficient. I had a recall from the factory on the motor Chris from your staff ordered the part when it came in I dropped the boat off it was repaired and missed no fishing time.

Your "staff" of Bruce and Chris in parts and service is knowledgeable and helpful. They answered any of my questions and showed me the the proper products to use that were not only good but less time consuming to use. Kudos for Meric as well in sales he knew his product, made you comfortable, and did everything that was asked. Most importantly the "first mate" (my wife) loved the boat. 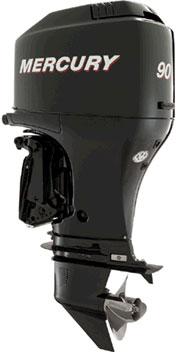 It is with great pleasure and satisfaction that I return the enclosed Customer Satisfaction Survey. I wish to add specific praise to the favorable ratings I have indicated on the survey.

The dealer for that ultimately fixed my engine problems is G & S Marine in Buzzards Bay, Massachusetts. The service personnel at G & S are unparalleled in attention to customer satisfaction. It is without hesitation that I commend them for a job well done.

I bought my motor from another dealer, I-Boats.com, an online reseller. The motor was a 'program motor,' a one year old unit resold by I-Boats.com after returning from a lease. I-Boats sold this motor with a 3 year Mercury warranty. I had other Merc outboards and thought, if Mercury will stand behind it, great.

When the motor arrived, it was still in the dead of winter so finding out how well it was going to perform was awaited with much anticipation. As spring arrived I fitted the unit to the hull, launched, and noticed some issues with performance I brought the boat and motor to a local Mercury dealer and had them go over all systems. It coast me a new propeller and Mercury paid for the replacement of some ignition parts as well. For that season, the motor ran, but poorly. We made do as it was seemingly ok.

The next spring, good & early, it was sent to a dealer near to my house, namely USA Marine in Worcester, MA. Here it sat for weeks and weeks as the service department kept promising me they would get to it and continuously breaking those promises. Eventually, 8 weeks after it was originally promised, it came back to me. Into the water it went and immediately it would not operate correctly. Not a good experience. I had told USA Marine that I suspected a carburetor problem. They rebuilt the carburetor. Well, now I really had a problem. I was told I could bring it back and maybe they could look at it in a mouth or two. Well, I was hoping to use the boat during the summer and not have it spend the entire time in the shop.

Since the boat is kept on Buzzards Bay, I call G & S Marine to plead for help. The person who answered the phone, to my surprise, was a neighbor of mine! Well, he helped to schedule my engine in for service as soon as possible. This was one week before Memorial Day. The service manager said he would do everything possible to have me boating on Memorial Day weekend. Well, I was out on my boat on Memorial Day weekend just like they said. They woo worked on the carburetor. However, despite the fine effort on the first try, it did not address he problem. Back in the boat came. It was determined that the entire carburetor must be defective. The replaced the unit and I had the boat back in no time at all.

It has been running fine ever since. Really, this is the first time it has been running fine. G & S was the only service organization that took the time to figure out what was wrong. They did everything they said they would, delivered on time, and made a tremendous impression on me. If Mercury is in the habit of giving service awards to dealers, G & S deserves one. 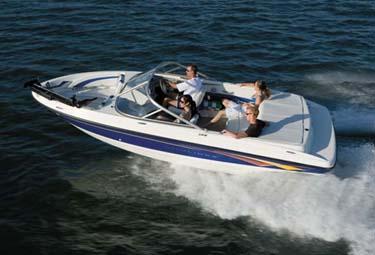 Dear Gary, Please accept this letter of accolade for one of your outstanding employees, Meric Goddu.

As one of your newest customers, we wanted to tell you about the wonderful experience we had buying our first boat from Meric. We are brand new to the boating world and have looked at boats for over 2 years. We knew we really wanted to buy a boat, but never felt comfortable with the whole process, and worried that learning how to use the boat, trailer it, take care of it, etc. were going to be really difficult.

We stopped by G&S one September weekend because we saw the boats as we were driving by. We planned to just look around and get some information. Meric greeted us and answered all our questions. He quickly assessed the type of boat we were looking for and comfortable with, and pointed out the perfect boat for us. Everything was on a friendly level, no high pressure, and his enthusiasm for boating spilled over onto us. He patiently answered all our questions and explained how easy it was to care for the boat, learn to use it, and that G&S would be taking us out on a seal trial and available at any time for questions or concerns. For the first time we felt excited rather than apprehensive about owning a boat!

Needless to say, we put a deposit on our 19' Bayliner cabin runabout the next week, and have been enjoying 2 months of fun and excitement. Meric's instructions were clear and easy to follow, plus we've called him a number of times with additional questions, which he answered enthusiastically and patiently. I was most touched when Meric gave us his cell phone number after our sea trial. He knew we were still a little nervous about taking the boat out alone for the first time, and wanted to be sure we had someone to call if we had a question out on the water. The reassurance was priceless.

We (reluctantly!) brought our boat in for winter storage a week ago and we're eagerly awaiting the spring so we can pick it up and continue our fun new family hobby. I believe we never would have "taken the plunge" if it had not been for Meric. We look forward to many years of happy boating and a great relationship with G&S Marine, and have enthusiastically recommended G&S, and specifically Meric, to all our friends looking for a boat.

Thanks for a great experience, Kristin and Peter McG. 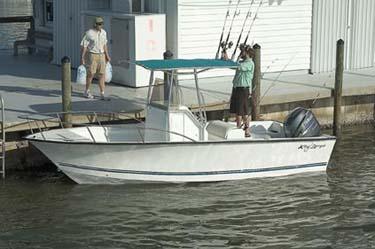 Thank you for my recent boat buying experience!!

It all began in early April of this year. It was 6 a.m. on a Saturday and I was prepared for a great day of fishing with my son and a friend. We launched my center console and were excited to start our 2006 fishing experience. However, the fish gods had another story line... the engine would not start. What was the problem, old fuel, bad plugs or gummed up filter. What to do!? Early morning 7:00 a.m.....Saturday... is fishing cancelled? I thought, "G & S Marine is right around the corner. I am not sure anyone is there at 7:00 a.m. I have never been there, but maybe someone could help." I pulled in and noticed someone walking across the parking lot. I called out and Ryan came over and introduced himself. He was just starting his day and they were not open yet. However, he turned on the lights and gathered some new spark plugs and filter to try to help us. I put everything in the boat and tried the engine again. It still did not start. The G & S guys were at the ramp launching a boat and walked over to help. They all took a look and fixed the problem, a stuck choke on the spot.

I started looking for a new boat during the end of the fishing season. G & S Marine immediately came to mind. Any company who takes care f a person, who is not a "regular" customer, would be a great company. I was right! The experience and professionalism G & S Marine extended to me made my new boat purchase even better. The ability to shop for a boat locally and have so many people who care made a big difference.

G & S Marine may not be a household name like Roto-Rooter yet, however, it should be the first name of choice if you live here, work here, and play here. They love boats as much as we do!!